Allied Data Systems is located in the "Northern Beaches" region that is about 30 minutes drive north of the Sydney CBD.

We represent a small number of companies in Australia and New Zealand for resale of their products. These include military and industrial interfaces; embedded computing modules and Internet of things gateways. However, a large proportion of what we do as a company is to develop hardware and embedded computing systems for our customers. We have done a number of systems for use on Australian Defence ships, aircraft and land vehicles. We have several major customers in the mining industries plus a number of customers in the industrial sector.

Our temperature and humidity test chamber allows us to test electronic equipment from -40 Deg C to +85 Deg C. Our humidity test capability allows testing from approximately 10% to almost 100% non-condensing.
We also have our own shock and vibration system. It is ideally suited to testing printed circuit board assemblies and other small devices and equipment. It has been used for testing accelerometers designed into black box recording instruments for clients and performing MIL-STD-167 and MIL-STD-810 shock and vibration on military equipment.
Following is a summary of some of the projects we have done or are working on.

Following is a summary of some of the projects we have done or are working on.

Hardware and Software Development
Allied Data Systems undertakes the development of the hardware and software to provide a complete package to the customer. Following are some examples of past and current projects. 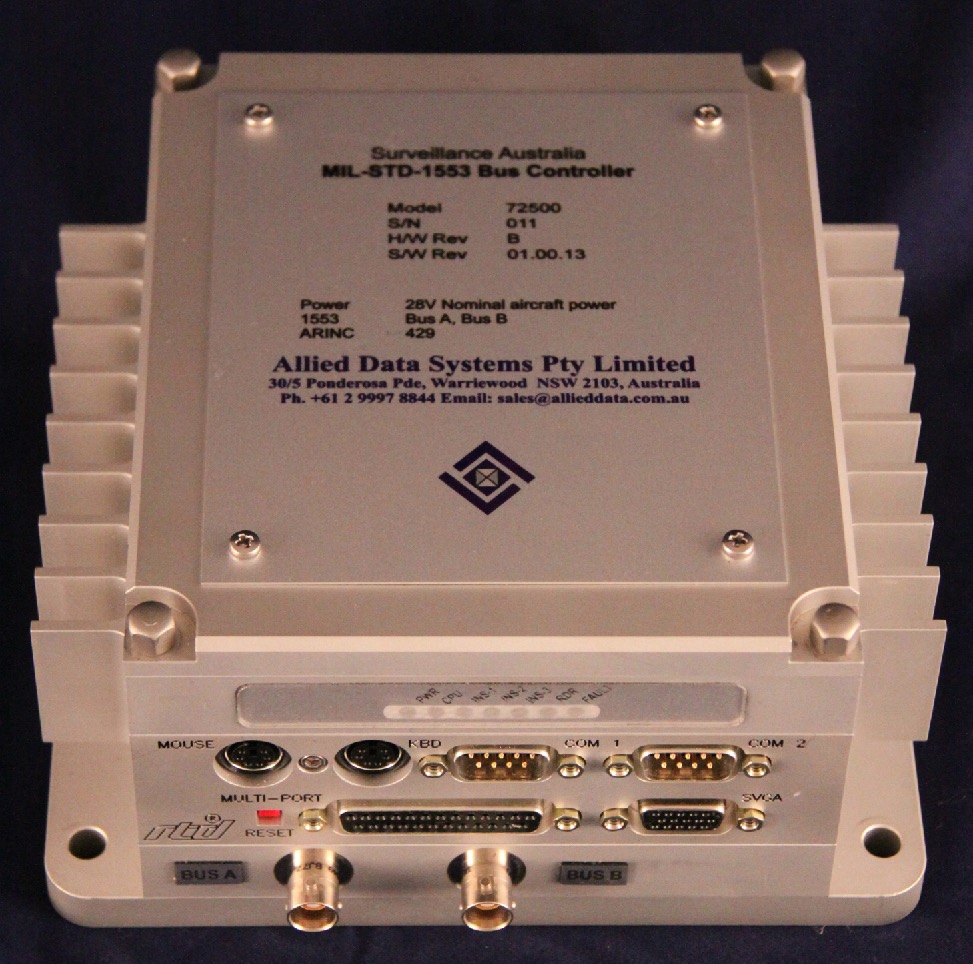 We built the MIL-STD-1553 bus controller that is used on the Australian Customs Border Watch aircraft. This design included the development of a PC/104 power supply to meet the commercial aircraft standard DO160. We also wrote the software for this to perform the Bus Controller function. We continue to maintain and support this equipment.

Allied Data Systems designed the hardware and wrote the software for the bus controller function for the Radar and INS used on the Custom's Dash 8 aircraft.

MMK13 Guided Missile Launcher Simulator and Permission to Train
The Mk13 GMLS was developed for use on the Royal Australian Navy FFG’s. It provides a simulation for the Launcher as well as the missiles including the Harpoon, SM1 and SM2. It allows live training with the on-board training

system passing control of the missile once it has been fired. The training officer, through the on-board training system is able to set scenarios for loading an incorrect missile, loading a dud and misfire for training. The simulator supports dud firing and jettisoning of the simulated missile, it also supports the simulation of training missile including preventing it being jettisoned. The simulator is also used for the Daily Operational Systems Test (DSOT) in place of the real GMLS that checks out each systems operational availability.
The Permission to Train System was also developed for the FFG’s. This system is a level 5 safety system with triple redundant detection of effector isolation prior to allowing the on-board training system to be operated. A companion to the Permission to Train System is the training indicator panel that displays what training systems are available.

Allied Data Systems designed the hardware and the software to simulate the Mk13 GMLS, and designed the triple redundant Permission to Train Safety System. 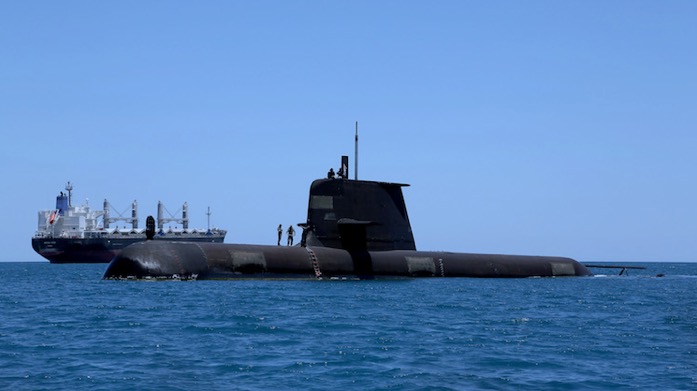 The phased array Doppler Velocity log was originally developed by EDO Corporation and is installed in a number of Australian Naval ships. Allied Data Systems has taken over the development of this system from EDO Corporation (now L3 Harris) and the latest released model is the 3045. This is a Form Fit for the original 3040 with an increased functionality to the original 3040. It uses the same phased array that the 3040 uses, provides the same interfaces but in addition has new NMEA and Ethernet interfaces available. 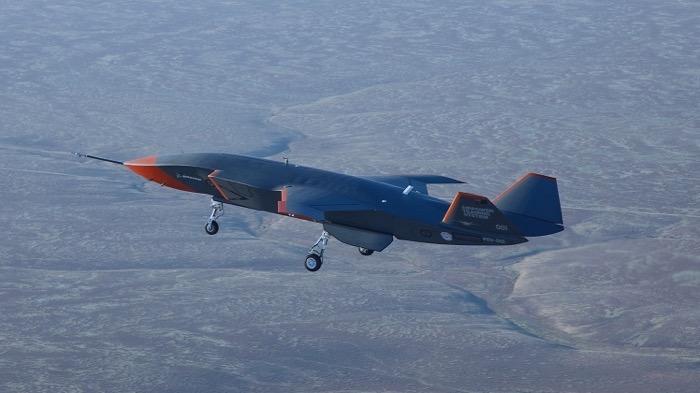 Designed and developed by Boeing Australia in conjunction with BAE Systems Australia, RUAG Australia, Allied Data Systems and more than 30 other industry suppliers, the Loyal Wingman has more than 70 per cent Australian content, and is part of Boeing’s Airpower teaming Systems concept which it hopes to develop for multiple international customers.

“This project is an excellent example of innovation through collaboration and what can be achieved working together with defence industry,” RAAF Chief of Air Force, AIRMSHL Mel Hupfeld said in a statement. “This demonstrates the importance of the relationship Air Force has with Boeing Australia and defence industry more broadly. I look forward to exploring the capabilities this aircraft may bring to our existing fleet in the future.”

The aircraft, which at 37 feet long with a 24 feet wingspan is the size of a small fighter, can fly at high subsonic speeds with various payloads and has been designed and manufactured in Australia.

Allied Data Systems is providing the solid state power control that has been designed specifically for and is used on this aircraft. 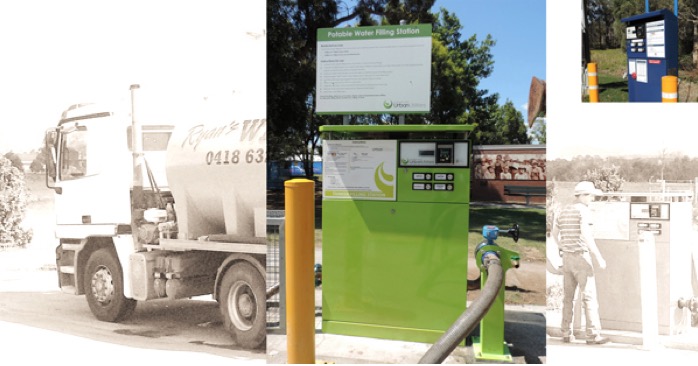 We have developed in association with Abberfield Technologies and Card Access Services, a kiosk system that provides for the supply of water in country areas for tankers, farmers, towns people and visitors.

Allied Data Systems is providing the credit/account card system including the software and hardware that controls the quantity and charges the customer for the delivery of water taken by the customer. 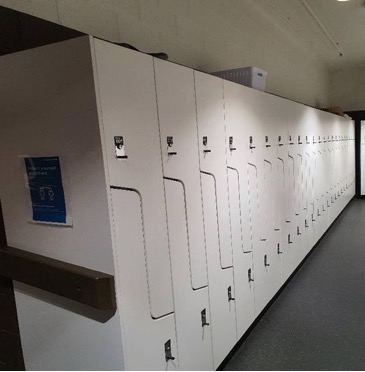 Allied Data Systems is providing the hardware and software that opens the lockers and/or opens and closes the parking bollards in response to the cloud booking system.